2,000 years of public baths in Vienna 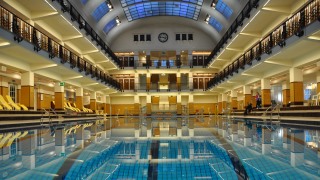 "The old Romans..." thus starts many a story, and some on baths in Vienna too. Almost 2,000 years ago people first frolicked in heated stone tubs near a former Celtic settlement. Mediaeval bath-houses can be traced back to the 13 th century. In Vienna, because of its amazing bath architecture, baths and culture were often closely linked. This is also true to some extent today, a fact which sets Vienna apart from the rest of Europe. Where splashing water and merry laughter resounded in the summer, concerts and balls were held in the winter. As in the former Sophienbad, to mention but one example. At one time open-air "bath academies” were organised in public baths during the summer. Here the Viennese would come to polish up their knowledge.

A bath-house and a theatre

Back in the 18th century Abbé Pohl, owner of a hunting castle, discovered sulphurous water on the site of today’s Theresienbad. The water proved suitable for bathing and drinking. The legendary Empress Kaiserin Maria Theresia bought the castle and well. Thus, a bath-house came into being near her summer residence. A theatre was added later on.

As the river Danube was trained between 1870 and 1875 many of its side arms and the baths along them gradually disappeared. The City Administration built two public baths along the Danube instead. The Frey Bad built in 1810 was replaced by the Städtische Freibad (city outdoor pool) in a small basin on the left river bank in 1875. The Kommunalbad (community bath) up from Kronprinz-Rudolf-Brücke, today’s Reichsbrücke, was built in 1876.

The Kommunalbad was designed for more than 1,200 visitors. It was fed with heated water from the Danube 30 times a day, which was quite spectacular for those days. There was one main pool, two smaller ones for women and two for men. The "Auskleidehütten" (change rooms) of the outdoor pool were dismantled in the winter. They were kept in storage in a flood-protected place. Men only were admitted to the Städtische Freibad until 1877. A women’s bath was introduced that year.

River baths were established along the Danube canal in the early 20th century for public health care purposes. They were non-profit institutions. The Gänsehäufel river bath along the Old Danube was built during that time.

The swimming facilities along the Danube have since been replaced by the recreational area along the New Danube. The latter was originally designed as flood protection. The Viennese soon took to the area because of its year-round high water quality.

The vast majority of baths were built in the inter-war period and following implementation of the 1968 public bath concept. The latter provided for 14 pools to be built within a seven year period. Investment volume at the time was approximately 500 million Austrian Schillings. A number of district pools, both indoor and outdoor, were built in the course. The district indoor pool programme (part of the public bath concept) was based on investigations on each pool’s catchment area. Thus, many pools were built in densely built-up areas such as Simmering, Brigittenau, Döbling or Donaustadt.

The Theresienbad has an imperial history to look back on. The Jörgerbad was built in 1914 in the Wiener Werkstätten (secession) stile. The Amalienbad opened in 1926 is very interesting from the architectural point of view. It used to have a glass roof which would open swiftly in fair weather. Many historical baths were destroyed during the Second World War but have since been renovated for public use.

Increasing industrialisation and explosive growth were characteristic of Vienna in the second half of the 19 th century. It was the so-called Gründerzeit (period of promoterism) which brought throngs of people to Vienna from nearby areas and from the crown lands further afield. They came here in the hope of finding work. In 1910 Vienna had more than 2 million inhabitants. Housing and hygiene were a disaster for many. This induced the City Administration to build baths for the people – the so-called "Tröpferlbäder".

The first public shower bath in Vienna was opened on December 22, 1887. Located in the 7 th district, in Mondscheingasse 9, it disposed of separate showers and change rooms for 42 men and 24 women. This cleansing bath for the people was an absolute novelty in all of Europe. 78,000 people visited the bath in its first year.

By the beginning of the First World War a further 18 shower baths had been built. Approximately 3.5 million people made use of the Tröpferlbäder in 1914. Only 30 percent were women.

Public shower baths had two categories. In category one every visitor had their own, lockable shower unit. The units were fitted with change facilities and a mixing tap for hot and cold showers.

The shower baths usually had their water tanks in the attic. They did not hold sufficient water for great numbers of people. At peak times water would merely drip from the shower heads. That is how the public shower baths got their nickname Tröpferlbäder (from Tropfen = drop).

For workers in Vienna the public shower baths were the only means of proper body hygiene for many decades. They proved a blessing for people’s health.

With increasing housing comfort the number of visitors to the Tröpferlbäder has gradually declined. Most public shower baths have been closed or fitted with saunas and turned into warm baths.